ecoTHRIVE seeks to build affordable villages that are ecologically sustainable and cooperatively owned—creating beautiful places where people thrive and that surrounding neighborhoods are proud of.

We envision vibrant, affordable communities where people are connected with nature and with each other.

Why We Do It

While housing affordability is the immediate crisis that drives ecoTHRIVE, our community-building approach addresses the deeper roots that underpin the crisis:

We’re forming a Community Land Trust to create pathways to ownership that are accessible to people earning low incomes, now and for future generations.

The vision of a Resilient Village emerged from our conversations with community members—at farmer’s markets, community festivals, local parks and homeless encampments throughout King County.

We began each conversation by asking two questions:

Through hundreds of conversations, responses consistently fell into two areas:

The vision that emerged is a Resilient Village that thrives in a culture of mutual aid, shared resources, interdependence and beauty. With resilience as a touchstone, these communities are designed to withstand the impacts of economic downturns, climate disruption, and food insecurity.

Further conversations and research fueled our confidence that together, we can build truly sustainable communities, make them attractive, and make them last.

We are committed to a community-centered, anti-racist process.

From the inception of our concept, we have been committed to listening, particularly to those most impacted by systems of oppression.

We have engaged in hundreds of conversations to develop our concept and our plan and will continue to collaborate with community organizations, particularly BIPOC-led organizations, to identify and recruit resident-owners.

After years of collective experience working in collaborative, grassroots organizations, we’ve learned that the decision-making process has a tremendous impact on the engagement of the team and the effectiveness of the decisions. We use Sociocracy because it’s the best decision making process we have found for organizing cooperative communities.

We are artists, architects, designers, developers, builders, activists, attorneys and organizers seeking to build sustainable, thriving community-centered villages. Our team includes people who have experienced homelessness and trauma. We all came together to address the housing crisis in King County, Washington. 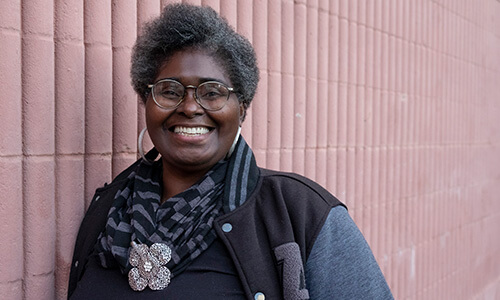 Zsa Zsa organized the first homeless march in Eugene, Oregon. “I had $1800 in my pocket and two jobs but no one would rent to me. I was living in a Pinto with 3 kids.” She worked with the head of the NAACP to bring attention to local racial and economic injustice and was appointed to the Springfield (OR) Human Rights Commission where she served for a 4-year term.

After experiencing too many years of homelessness, Zsa Zsa moved into Camp Second Chance in South Seattle where she quickly became a respected leader and board member. She was trusted to mediate conflicts and counsel campers. She describes her role as “Creating a community where people felt safe and at least liked, if not loved, although love is best. And I listened because everything matters.” Zsa Zsa also used her considerable administrative skills to set up the camp’s first bookkeeping system and database.

Zsa Zsa has since moved into permanent housing and continues to advocate for people experiencing homelessness. She began as a consumer advocate for the Community Advisory Group (CAG) of the Seattle/King County’s Health Care for the Homeless Network (HCHN) and was voted onto the Executive Committee. Zsa Zsa currently serves as Vice Chair where she develops agendas for the executive board, determines training needs and facilitates meetings, in addition to her outreach work on the streets.

Building community isn’t just a strong value for Zsa Zsa, it’s part of her DNA. Her grandmother’s family was one of the first Black families in Eugene. Prior to moving into town, they lived in a tent city along the Willamette River. At that time Black people were not allowed to live within the city limits. In the 1960s, Zsa Zsa’s grandmother Mattie Reynolds ran for Eugene City Council and now has a city park named after her, honoring her commitment to social justice. As Zsa Zsa says, “This is where my sense of empowerment comes from.” Zsa Zsa graduated with honors from Sanford-Brown College in 2009.

“We were oppressed and depressed, but we had one another to raise each other up” 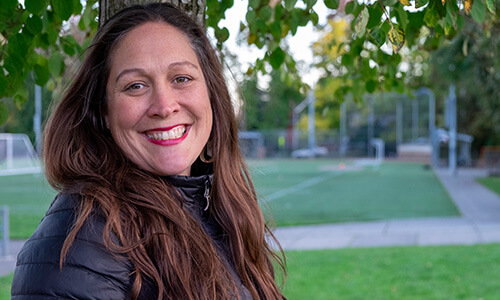 Susannah, currently a fundraising consultant, has over 15 years of fundraising and partnership investment experience. She has led fundraising campaigns for environmental justice and land conservation efforts, including working closely with donors and tribal councils to secure over 4,000 acres in Kitsap County at the Port Gamble Forest.

Prior to fundraising, Susannah spent a decade running large-scale art fairs and events for a commercial art and design college.

Susannah is committed to doing work that advances a more sustainable world and more equitable society. She is passionate about the intersectionality of economic justice, land conservation, the right to housing, food sovereignty and Native land rights.

Susannah also serves on the Board of Directors for the Port Gamble S’Klallam Tribe Foundation. 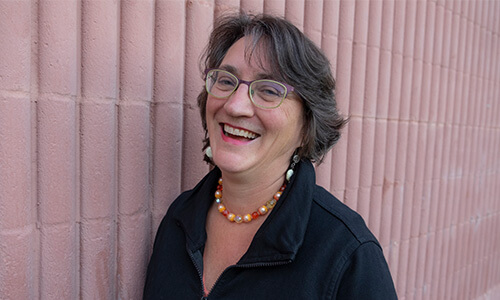 Denise helped launch the first Fremont Summer Solstice Parade and build the Fremont Troll. In 1996, she initiated the Village Project- a cooperative entrepreneurial education program that connects elementary students to their local communities.. The Village Project continued at BF Day Elementary School until 2020.

Denise’s successes in building joyful community coalitions led to a career in workforce development, providing technical assistance, oversight and analysis to education and training programs throughout the country. In 2007, she instigated Arts A Glow, a community lantern festival in collaboration with the City of Burien. Denise created the Salmon Is Life performance troupe that traveled to Paris for the 2015 Climate talks. It was through supporting Susan Russell’s vision to make art in homeless encampments that ecoTHRIVE Housing was born.

Denise has a Master’s Degree in Human Development from Pacific Oaks College and a BFA in Crafts from Virginia Commonwealth University. 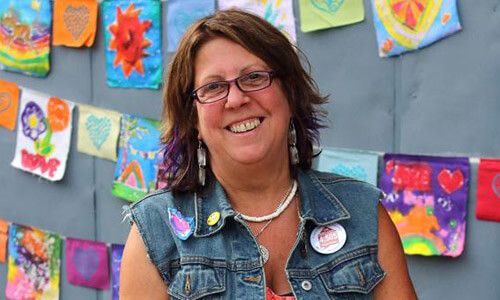 Susan is a Real Change vendor who experienced 7+ years of homelessness in Seattle/ King County. She is a requested keynote speaker advocating for human rights, and was awarded the 2018 Real Change Change Agent Award for her work bringing people together through Art, Compassion, Love and Action. Currently, Susan serves as the Program Coordinator for the Phinney Neighborhood Association’s Hot Meals program where she leads a team of volunteers who feed people experiencing homelessness and food insecurity.

In 2016 she co-founded Love Wins Love, to bring people together—homeless and housed—to make art and share stories and ideas for reimagining housing. The conversations generated through Love Wins Love planted the seeds from which EcoTHRIVE Housing has grown. Susan is passionate about creating affordable housing solutions and rebuilding the community as a whole. 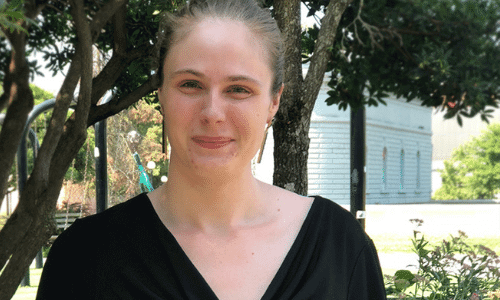 Emma is a designer, community builder, data enthusiast, and artist. She runs a consulting business (Marjorie Design) which focuses on providing digital infrastructure and project management services to communities and businesses. She is also a member of the 2019 cohort of the Housing Development Consortium‘s affordable housing leadership development course.

Through her studies at Hampshire College, she became driven to ensure that everyone has access to thriving and resilient communities. Emma began her education with a drive to promote environmental sustainability. While exploring sustainable architecture Emma studied how her grandmother had designed her own home. As a nurse and realtor, Emma’s grandmother made a home that she was able to live in for the rest of her life. Emma was inspired by her grandmother’s care, foresight, and innate application of universal design principles and Emma carries those lessons with her in all areas of her life. 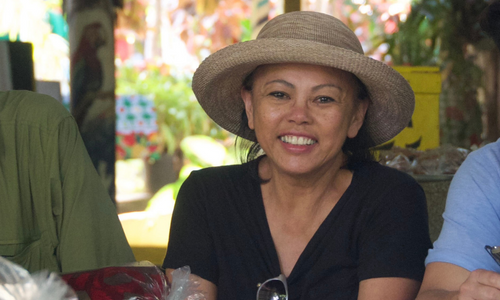 Lead Project Designer/Developer
Dara's Bio +
Dara is a co-founder of Utopia Design + Develop, LLC, which specializes in innovative design, environmental stewardship and cost-effective solutions for new construction. She is a designer and project developer for the past 30 years on a wide variety of project types including custom residential, multi-family and commercial retail center.
Envelope
Link 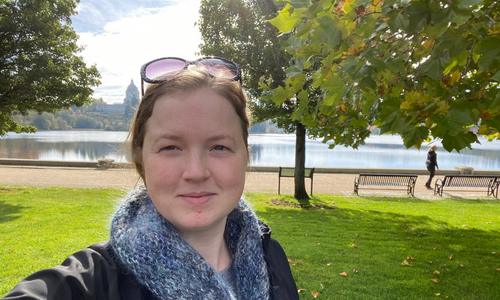 Melissa believes that humanity can be a beneficial presence on this planet, and that everyone deserves to thrive. She has spent the past fifteen years learning all she can about how to design and cultivate homes and futures that work for everyone. Her interests span sustainable infrastructure, biophilic design, natural building, permaculture, network convening, cooperative ownership, business design, real estate, and land development. She graduated from Evergreen State College in 2019, after spending the early part of her 20s in Canada as a young mother, and spending several years in the tropics studying and building integrated food-forestry and aquaponics systems in four countries. She is passionate about affordable housing, democratic governance, and community land trusts, and is dedicated to ensuring all people have the dignity of shelter, stability, support, autonomy, and a path to a good future.

Our process is community-driven, collaborative, and proven—building on the experience and wisdom of others to ensure an enduring and scalable solution.

SquareOne Villages (SOV) has been an invaluable inspiration and support. SOV builds affordable villages in Lane County, Oregon. The Village Model is an innovative ownership structure SOV is implementing that brings together two forms of shared-equity homeownership—a Community Land Trust and a Limited Equity Cooperative. ecoTHRIVE became legal affiliates with SOV in 2020 to replicate the Village Model in King County, Washington.

Our immense gratitude goes to the Taubman Foundation for believing in our vision and our ability to carry it through.

Together we can shape the future of housing in King County.

You cannot change any society unless you take responsibility for it, unless you see yourself as belonging to it and responsible for changing it.
—Grace Lee Boggs